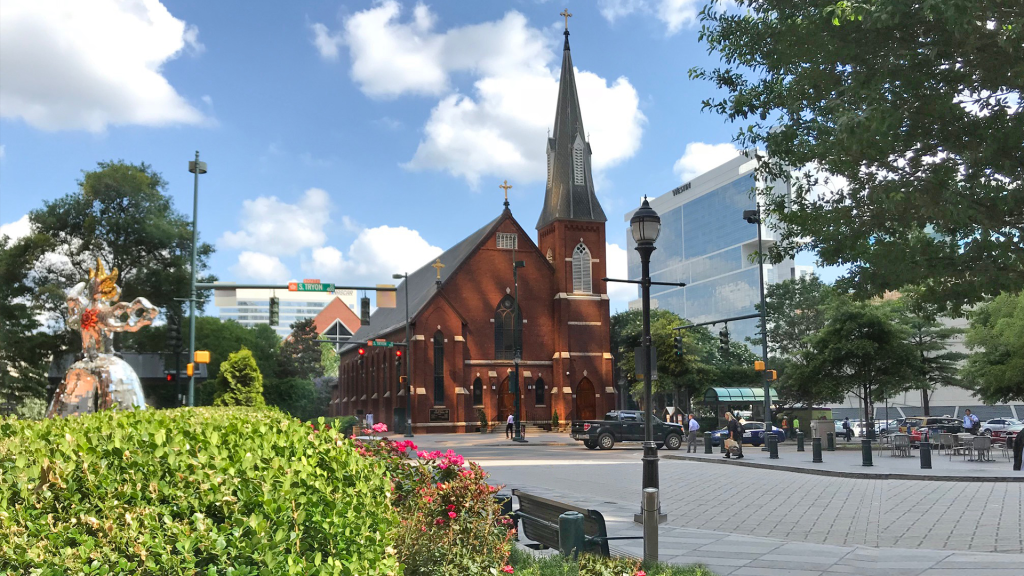 Our Pastor Fr. Tim Stephens, SJ, welcomes you to our vibrant and growing church. Ever since 1986 when the Bishop of the Diocese of Charlotte asked the Maryland Province of the Society of Jesus (the Jesuits) to administer and serve this parish, the people of St. Peter have engaged in a faith that does justice through our Ignatian spirituality. The Jesuit presence throughout this region is felt through the compassion of healing hearts, as Pope Francis calls us to be when he says, “I see the Church as a field hospital after battle…healing wounds.”  The Ignatian spirituality at St. Peter provides opportunities for retreats into a deeper relationship with Christ and a discernment of seeing God in everything. St. Peter is blessed to have two Jesuit priests serving our parish in pastoral care and inspiring merciful outreach to those living on the fringes of society: Fr. Tim Stephens, SJ, Pastor, and Fr. John Michalowski, SJ, Parochial Vicar.

The people of St. Peter are strongly committed to the poor.  You will see this reflected in many pieces of our artwork. The parish outreach extends to migrants and refugees starting new lives in our city. As a church in the center of the city, we serve all people who enter our doors.

Since its rebirth in 1986, the parish has grown to over 1,400 registered households. The church transformed in the mid 1980’s; the Jesuit priests brought vitality to the liturgy and inspired members to live their faith doing justice. St. Peter became an authentic parish again. As the city of Charlotte began its extensive growth, the Jesuit priests established strong ties to the uptown business community – serving pastorally and in the strategic development of social justice church ministries. To this day, St. Peter members reach out to help the marginalized in our community.  Parish outreach programs focus on concerns for refugee resettlement, shelter and affordable housing, youth education & career opportunities and race relations. As our former pastor Fr. Jim Shea noted, “St. Ignatius would be happy that we are in the Center City, as a missionary church going forth to serve.”

We are a discerning people; listening to where we are called to act in mercy and encourage others. We welcome all to share in the joy of the Gospel and to come to know and taste God’s love. 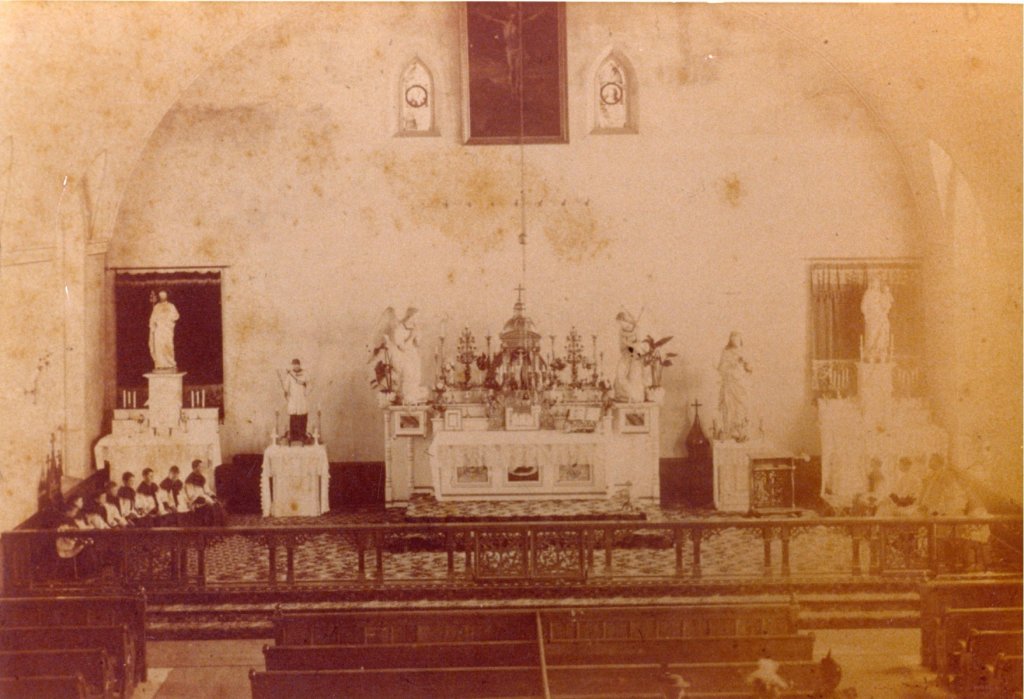 When several hundred Charlotteans, half of whom were not Catholics, watched the Rev. J.J. O’Connel lay the cornerstone for the original St. Peter Catholic Church in 1851, they saw the cornerstone of Catholicism in Charlotte put into place.

“For 90 years it was the only Catholic church in the city. It’s easy to interpret this church’s role in the city in light of the name Jesus gave Peter…Rock,” said the Rev. John Haughey, SJ, a former pastor. “Since the beginning Jesus has built his church on people whose faith was rock solid. They were a century ago. They still are.”
Benedictine monks were among those early ‘rocks’ at St. Peter. In 1892 the Rev. Francis Meyer, OSB, became pastor. He was the first of six Benedictine monks to serve St. Peter.
The original building stood for 41 years before it became structurally unsafe. A munitions explosion at the close of the Civil War had damaged the foundation. In 1893 the cornerstone was laid for the building that now stands at the corner of  South Tryon and First Street. First Street has since been renamed to “Levine Avenue of the Arts”.

“The structure is of Victorian Gothic style, simplified to a Germanic starkness prevalent in the post-war South,” according to Charles A. Hastings AIA, ASID, architect for the recent renovation of the church. “Victorian details such as the basket weave brick panel on the bell tower, fish scale slate roof, and just a hint of gingerbread on the steeple dormers suggest the era’s love for repeated design motifs. The Gothic pointed arch windows and brick and granite piers set the overall style of the church.”
An early benefactor of St Peter was Saint Katharine Drexel of Philadelphia. She founded Sisters of the Blessed Sacrament for Black and Native American peoples. Her gift of pews to the parish was contingent on a promise that they would be reserved for the “colored” people, in fulfillment of her order’s mission. 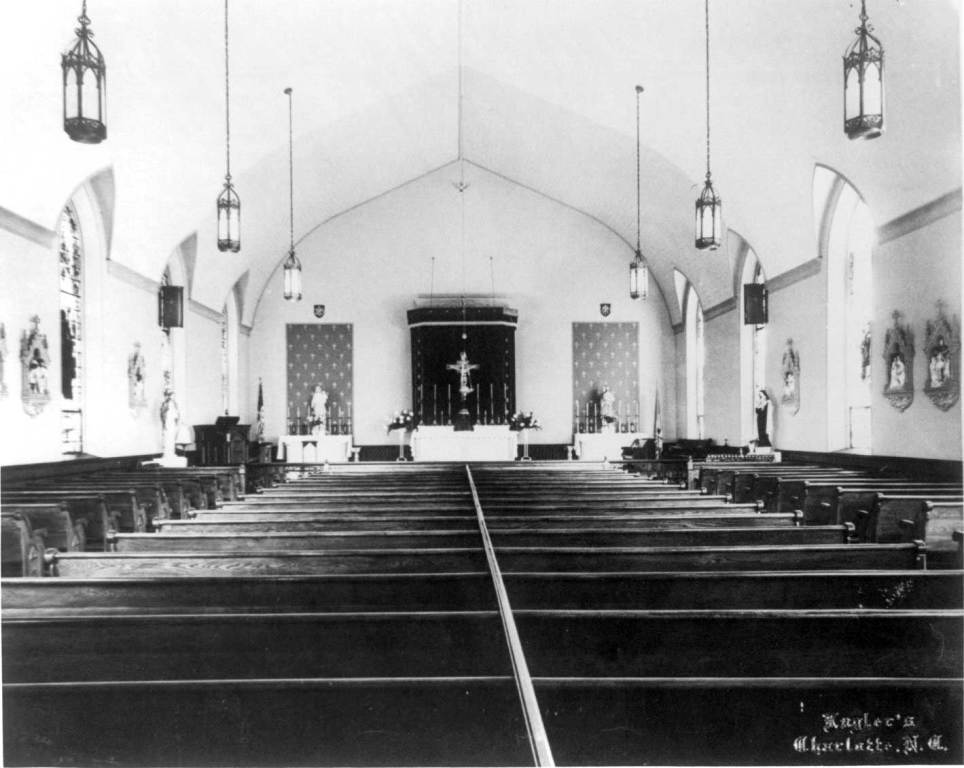 When the church was constructed it was at the extreme southern limits of Charlotte. As the city grew around St. Peter, the character of the neighborhood changed. Empty lots sprouted with homes. Later, homes were replaced with businesses. St. Peter is the oldest edifice remaining on Tryon Street. It’s a constant in an ever-changing urban landscape. The church was soon at the heart of the city. In recent years, steel and glass skyscrapers have begun to tower over the slender Victorian steeple.
The Catholic population of Charlotte grew with the city, particularly in the suburbs. New parishes were established to serve the growing community. Urban St. Peter gradually found itself with fewer and fewer parishioners. Though Masses were said, in 1970 the day-to-day activities of a parish stopped.
In 1986 all that began to change.
That year St. Peter Church regained full parish status. Jesuit priests - Pastor John Haughey and Parochial Vicar Eugene McCreesh, with the help of three other Jesuits - tapped into the spiritual, relational and intellectual hungers of the growing parish and of the business community which surrounds the church. The Jesuits have continued to serve the city with daily Mass and reconciliation. Catholics across the area come to this sacred space to grow deeper in a relationship with Christ and live a faith that does justice. 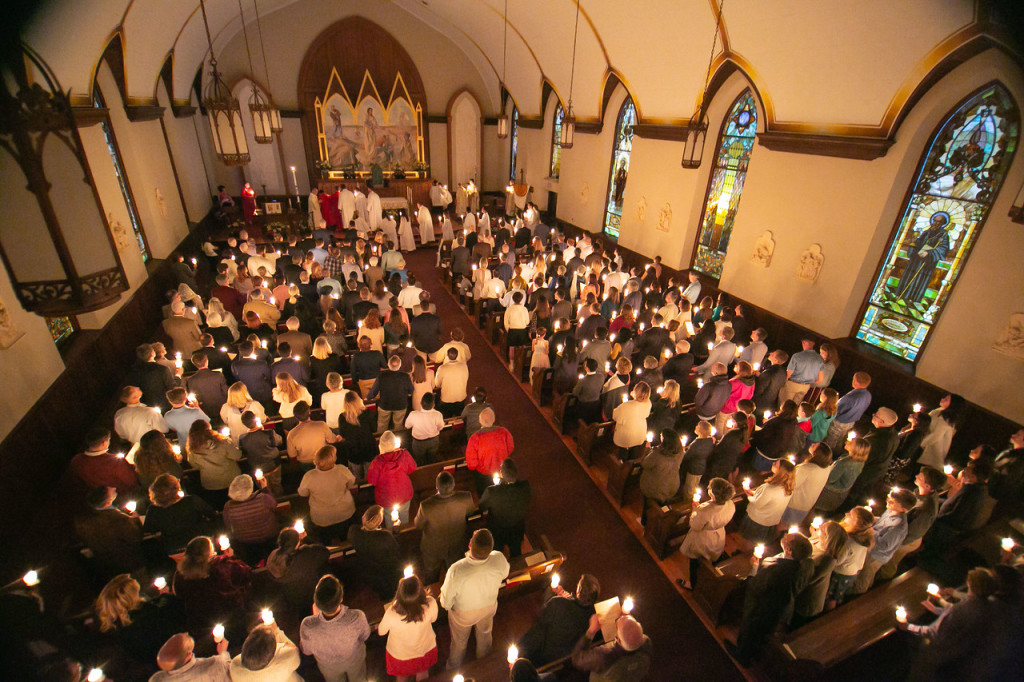 Today St. Peter’s congregation is a mixture of old and young, native Charlotteans and the newly settled, black and white, rich and poor, conservative and liberal, white collar and blue collar people. These people have banded together to make the church a small oasis of quiet serenity and beauty in the heart of Charlotte’s uptown business district.
St Peter Gardens

Changes began when a Victorian garden was planted on Tryon Street in front of the old rectory. Parishioner Ann McKenna,along with her sister and brothers, commissioned the garden as a memorial to their parents. “They felt that they wanted to share this garden with the people” recalled Phyllis Herring who designed the garden. “It’s not just for St. Peter. We wanted to create an enclosed space, but not one that was closed in.” 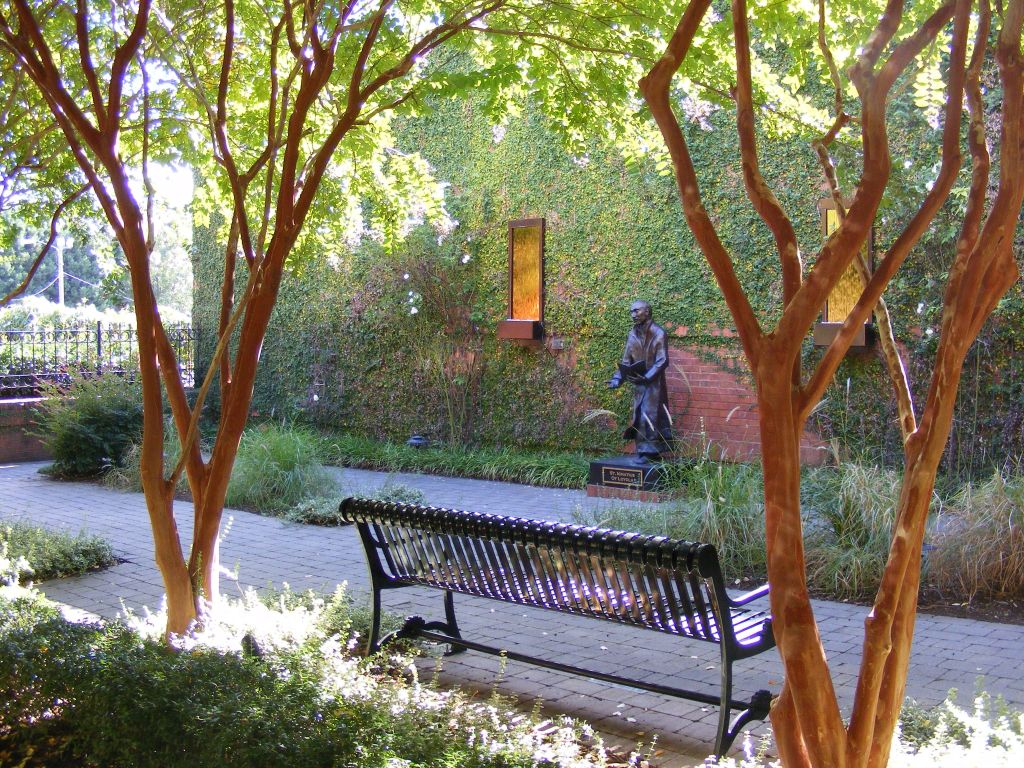 This small garden was only the beginning. Later, behind the church, a Meditation Garden for Prayer and a Columbarium were added. This area provides visitors with a respite, sacred space.
Restored Interior and New Artwork
The next project was the church itself. There had been many changes to the interior of the church over the years. Everything from the crown molding, to the pew, to the ornate plaster stations of the cross had been painted in a rainbow of hues.
Architect Hastings and interior designer Anne Geary of Geary Designs collaborated on a plan for the restoration of the historic building. They worked closely with the St. Peter historic society, who guided the restoration. They assembled the team of professionals who would bring the old building back to its former glory. Charles R. Carmichael was retained as general contractor. 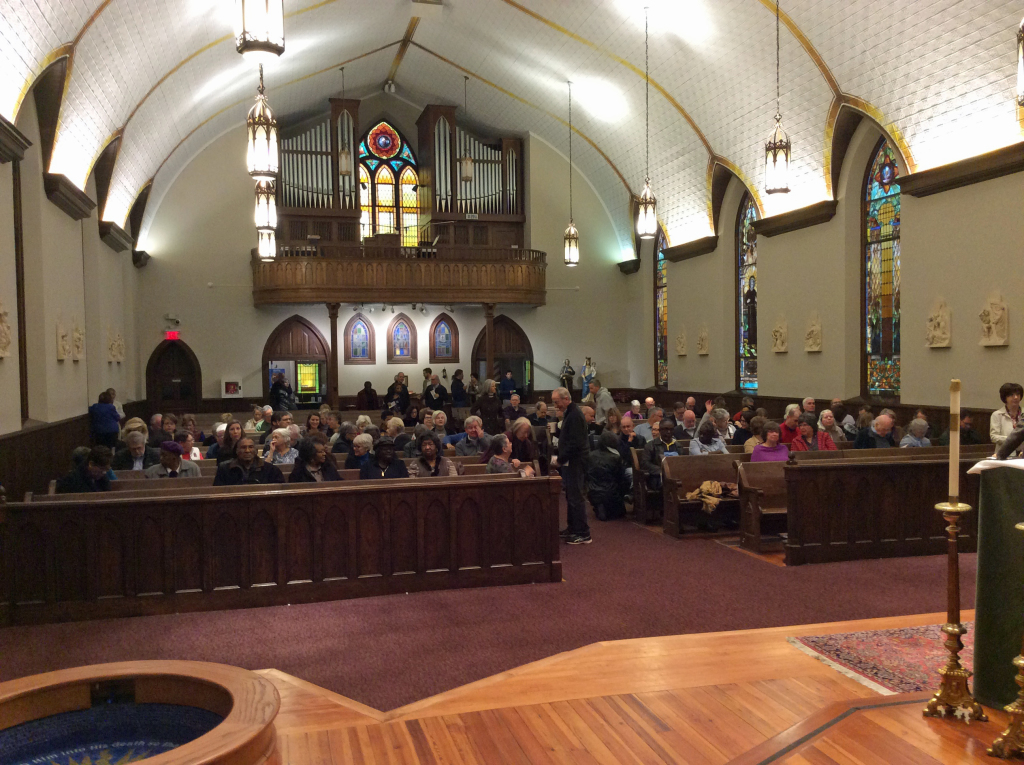 “The challenge was to create a timeless interior.” Geary explained. “The day that I brought James Corpening in, the wood refinisher, I was so excited when he told me that there was a beautiful wood floor under the vinyl asbestos tile. He remembered seeing the church 20 years earlier. Today the interior carries an understated elegance.”
“The interior has been restored with a simple and warm use of natural wood window casings and beaded board wainscoting,” Hastings said. “The delightful balcony railing with its delicate Moorish arch design and the crown mold of grape vine motif has also been restored to their natural heart pine finish. “The overall shape of the ceiling repeats the Moorish arch and, in typical Victorian electric fashion, is an intaglio basket weave pattern pressed into sheet tin.”
“Since the turn of the century, the furnishings and finishes of the church have been changed to reflect the times. Today we see the modest simplicity of natural wood and cream colored walls which frame the sanctuary for the liturgy of the Mass.”
Artist Paul Sires modified and refinished the Stations of the Cross. The altar and the lectern tables were fashioned by Michael McSwain. Oliver Thompson, who made the processional cross, coordinated the stripping and reinstalling of the pews with a crew composed of many parishioners.

Richard Karnia has constructed the tabernacle designed by Hastings. Paul Ehrenberg, former Facilities Manager, built the baptismal font.
The 35 by 44 foot blank wall at the rear of the sanctuary could have been seen as a problem in the restoration, but to the historical society, it was an opportunity.
“The Catholic church has a centuries’ old tradition of commissioning and preserving within its structures fine religious art,” said Anne McKenna, a member of the historical society. “The parish was familiar with the frescoes of Ben Long in the mountains of North Carolina. We had this huge, bare wall sitting there like a canvas, ready to be transformed. I was thrilled when the committee asked me to bring Ben here to continue the tradition at St. Peter.” 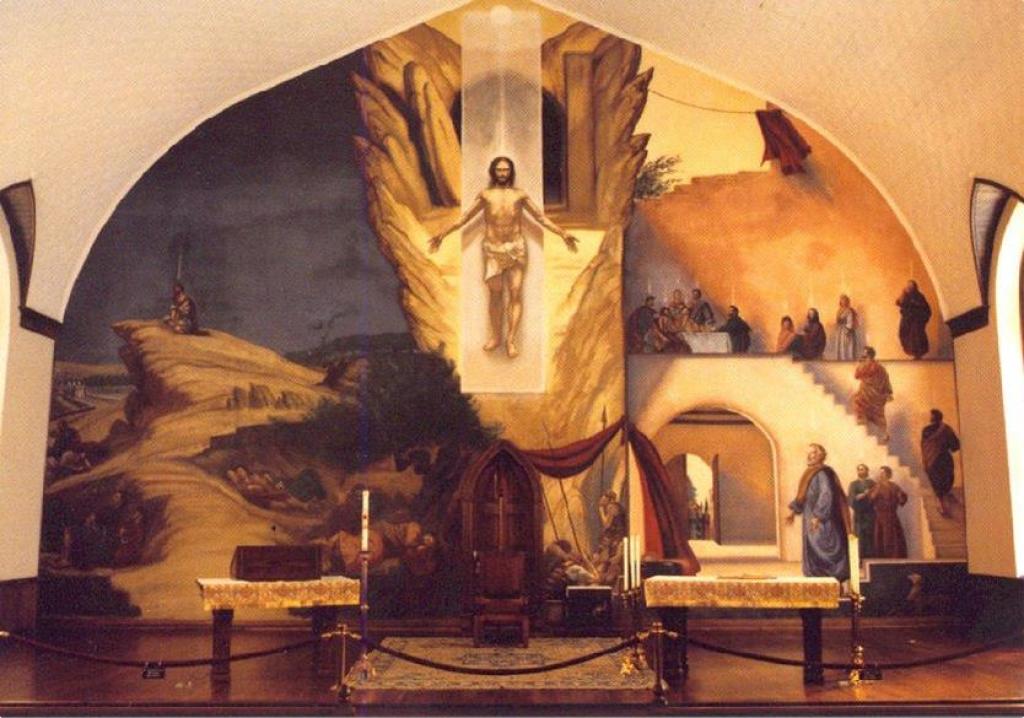 The result was a triptych, or three-part fresco. It depicted Christ’s “Agony in the Garden,” “Resurrection,” and “Pentecost” the visitation of the Holy Spirit on the Apostles.
The fresco, in fact the entire restoration, represented a tremendous investment in uptown Charlotte for a parish of 350 families.The parish used over 20 percent of the money given by parishioners to the church for the poor and homeless of Charlotte. For many, the decision to spend almost $200,000 on the restoration and the fresco was a difficult one. “There’s a quotation from a Hindu poem hanging on the wall of Mother Teresa’s places for the dying in Calcutta,” said Father Haughey. “It says, “If I have two pieces of bread, I will give one to the poor and sell the other to buy a hyacinth.’ We all have a hunger for beauty. Good religious art evokes a sense of God.”
Artist Ben Long agreed. “For the true believer, it must provide a glimpse of the divine.” The fresco at St. Peter was Long’s fifth. He was assisted in his work in Charlotte by Charles Kapsner, Laura Buxton, Anthony Panzera, Joshua Rosen, Roger Nelson and Tony Griffin.
St. Peter was rededicated in 1989 after the renovation, restoration and completion of the fresco.
In February of 2002, a third of the fresco’s center fell to the floor in millions of pieces.  Parts of the fresco remained attached to the wall, and some parts loosely hanging.  The skillful process of removing these remaining portions took months, but the church was able to frame these pieces of the original fresco and display them in campus buildings. 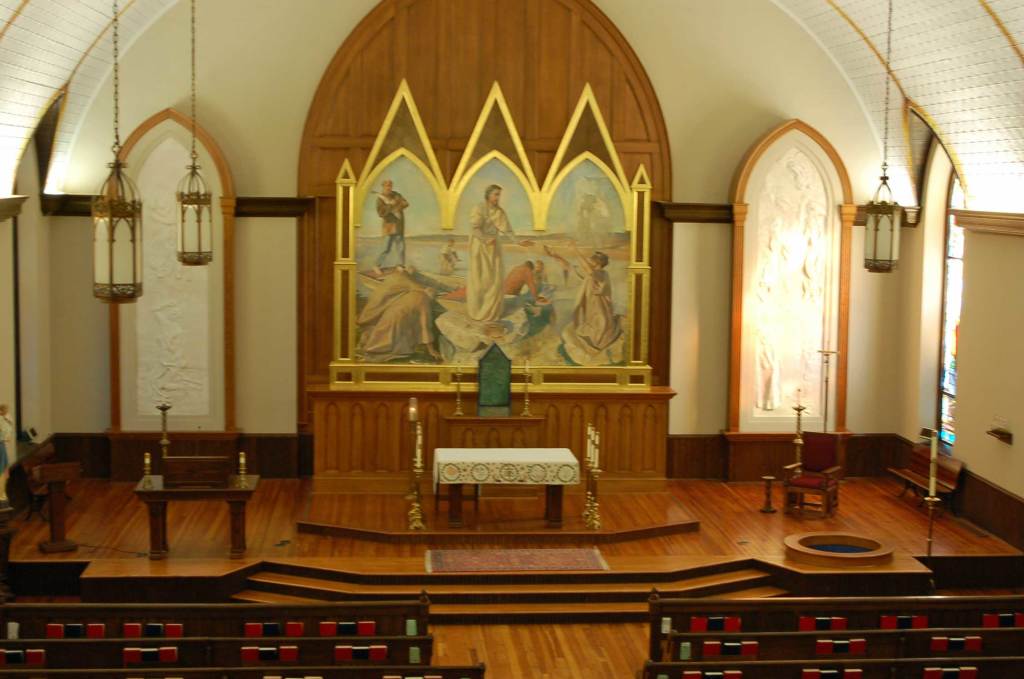 New artwork was installed in 2007 and these include the altar triptych painting and bas reliefs on each side of the back wall.

St. Peter Church has a rich past, a vibrant present and a promising future. Amid the flurry of activity, the mission of St. Peter is still rock solid…to share in the joy of the Gospel and come to know, love and serve God and one another.  We are a church animated by the spirit of Saint Ignatius, who said “All the things in this world are gifts of God, created for us, to be the means by which we can come to know him better, love him more surely, and serve him more faithfully.”
For a  guide to the artwork of St. Peter, please select this link Artwork at St Peter Catholic Church.
Share this page on